So, I’m sure you’re all interested to know how someone becomes a Lad. I’m sure some of you on the outside can only imagine the rituals that must take place in order for a prospective member to make his bones and join The Lads.

Lurch and I were like a packaged deal. You fucked with one of us and you fucked with the both of us. This idea expanded to include a whole set of our friends throughout The Valley, Hollywood and Los Angeles. So Lurch and I were already out doing the work… I.E. Beat downs, muggings, contracted hits, intimidation, menacing and other assorted trades I can’t mention here… We were also well known for carrying dangerous toys like guns, bombs, knives, crossbows and napalm.

After that chance meeting with Alex in front of The Whiskey a close personal friend, “John” came to me and asked me if I would be interested in meeting with Alex formally to discuss possible admission to The Lads. He said that he was IN and he wanted Lurch and I also to be IN due to our history with each other.

So, in the beginning of 1982 “John” took us out to Hollywood to meet up with Alex. We parked up the street from Alex’s apartment and Alex came out to meet us. As soon as he walked up he recognized us from The Whiskey incident. He immediately showed interest in bringing us IN. From there things happened pretty quickly, Lurch and I were introduced to everyone IN and we began following the set where ever it went.

We got introduced at the Sunday meeting in Poinsettia Park in Hollywood and everyone gave us the nod and agreed we were IN! Soon after, Lurch an I were invited to Alex’s Apartment and that day he created two new armbands for Lurch and I while we watched.

During that day Alex told us many things about being IN The Lads… “WE chose YOU because of who YOU are.”…”Don’t go and become someone you’re not, now that you’re IN.”…”Don’t bring US extra heat we don’t need.”…”Keep your mouth shut and your eyes and ears open.”…”We’re here to protect OUR scene.”…”Don’t fight with other Lads, if you do, you’re OUT.” We were told to show up every Sunday for meetings, to wear all black and to wear our arm bands. At the time a lot of The Lads had the Skull & Bones on their leather jackets but the pigs were coming down on them. The idea of the arm band was that when the pigs showed up we could slip off the arm band and disappear into the crowd. 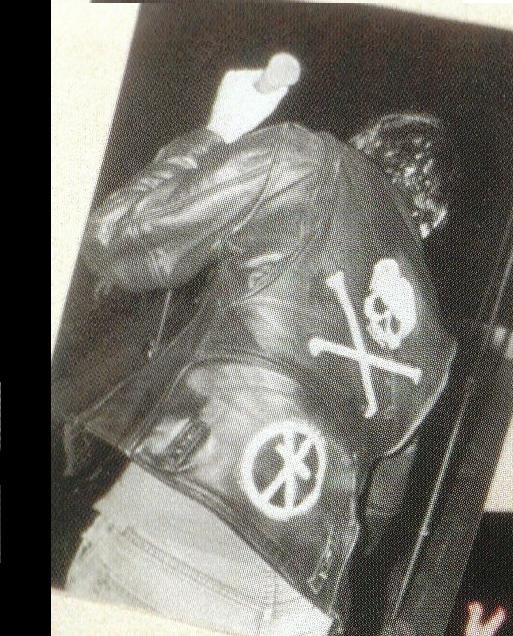 Now… about all the secret rituals that I mentioned before… When I came IN there was no jump in or beat down. Friends and people I counted on in those days didn’t do shit like abuse each other. Many of us came from abusive households that we were trying to escape and we wouldn’t put up with any beat down from a friend or anyone else. You just did The Fucking Work!

One thought on “Making Your Bones”