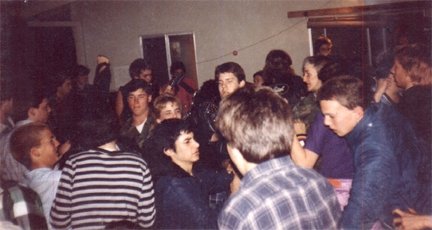 It was a cool windy afternoon in the fall of Oct.1979 that I went to my friends house. My friend John was just hanging around listening to some records when I walked in. I was completely unaware of what was going to happen that day. This day, this one day would lead me down a completely different path than the one I had been on just the day before. This one day would change my life far beyond anything I could comprehend at the time. This one day would change my attitude, the way I dressed, the way I looked at things and the way people all around me looked at me.

John glanced over and said I’ve got some new stuff as he laid a record on his Marantz turntable… The needle dropped and I could hear Black Sabbath’s first album Black Sabbath playing.. It was good, but it was something I had heard before…. I had been listening to all the rock stuff over the years…. I remember being about maybe 10 years old and watching Kiss play the song firehouse on Saturday Night Live. I’d sneak out to the family room late at night and watch Don Kirshners Rock Concert with the volume down real low so I didn’t wake up my parents.

But hey, I’m not here to drag you along through some boring story about rock and roll for nothing because what my friend put on next changed the path of my life forever. He says, hey if you like the heavy stuff check this out and he laid down The Sex Pistols: Never mind the bollocks… I couldn’t believe it…It hit my like a lightning bolt from above and by the time the album got to the second song, Bodies, that was it… This was it!.. It was something I had been looking for my whole life! That sound, Johnny Rotten’s voice, and that guitar… I just couldn’t get enough, I had to borrow the album to make a cassette tape that night which I did. I just jumped right in and by 1979 I was deep into hardcore punk music from then on. Even now, I’m listening to that album as I write this and damn.. its still fucking rad!

There were two paths that I could have gone by but I’m glad I took the path of Punk Rock. It’s been a hell of a ride!….a living hell ride!

and Mom said it was just a faze…