In the 80’s if you were a minor and wanted beer but you didn’t know anyone old enough to buy you’d just hang outside a liquor store and pimp for beer until the right person came along. It was never that difficult to score some liquor in those days. It wasn’t a big deal to most people, some gave their opinion that “I’d rather see ya drink some beers than see ya using drugs”.

On this night in 1980, I’m with friends at the corner of Sunset and N. San Vicente at the gas station. We just scored some beers and we decided to sit down behind some cars along a wall and drink em. We were there for a few minutes and I guess us being kids and all we were making some noise.

Some mouthy broad in an upstairs window of the next door apartment yells down at us.. “Hey you drunken bums keep it down out there”. So I yell back “go fuck yourself ya fucking lame cunt”!

It turned out to be the Currie sisters and friends that night… Supposedly they either lived in or hung out in that upstairs apartment with Joan Jett in those days.

In those days there was always something going on at The Sunset Strip. Riots, assaults, fires…and lots and lots of shows. I watched one time as some guys lit a dumpster on fire then pushed it, in flames, down N. San Vicente watching it crash into cars all the way down the hill.

One time some guy got thrown from the upper level of the Great Western Bank parking structure onto Sunset Blvd across from Gil Turner Liquor.

I was with John of Circle One and a bunch of other guys one night as multiple punk shows were being held on Sunset blvd. We completely controlled the street and began just rolling up and down Sunset literally knocking the shit out of anyone that wasn’t punk rock. Near Gazzarri’s John of Circle One ripped the hair out of some rockers head and then draped the hair over his skinhead, then looking at everyone he said ” how do I look?”. When some other rocker ran up after hearing the guys screams for help, John looked the guy dead in the face and said… “about how much do you weigh..about 180?….My boys are awfully hungry, I think we just might snatch you and eat you!” All of us laughed menacingly… The dude literally just turned and ran away.

It was incidents like these that slowly brought me a level of notoriety and people I didn’t even know began to pay attention. I ran with a tough crowd and word got around that we could take care of business. Friends and even people I didn’t know would ask us for help from time to time. We’d hear a rumor that a punker was gonna get beat up after school by someone, at a school that we didn’t even go to and we’d just show up there and terrorize the whole campus in that persons defense. Teachers, parents and students alike were all afraid of us. They didn’t know what to do. 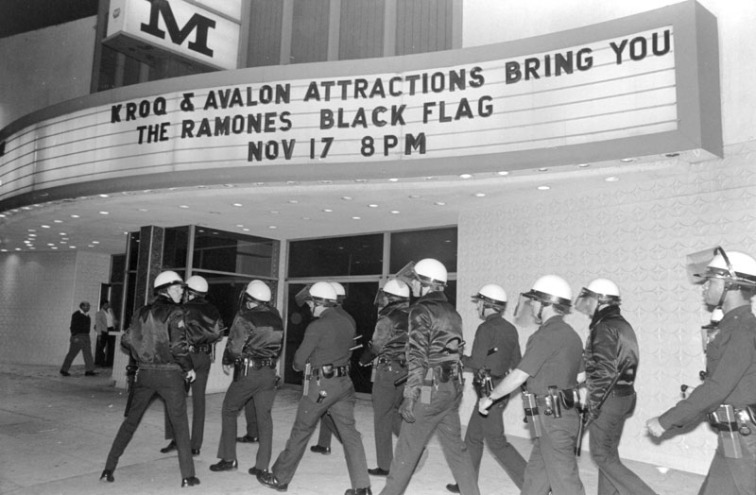 Due to poor training and it’s lack of any cultural awareness the L.A.P.D. instigated many riots at punk shows in Los Angeles during the 1980’s. The Cops, overwhelmed by the crowds of Punks would call in an equally overwhelming show of force that would only antagonize the crowds into further levels of grotesque violence. The Police would move in, sticks at the ready and then they’d pick off the weak and the slow for beatings and arrest. Not moving fast enough out of an area could get you smacked upside the head with their nightsticks.

I was in a lot of riots in my day. Too many to count, too many to remember. We’d completely control an area and then the lights and sirens would come in… Rocks and bottles would fly at them from every direction. They’d retreat and regroup then return with helmets on and begin beating everyone within sight with their night sticks. 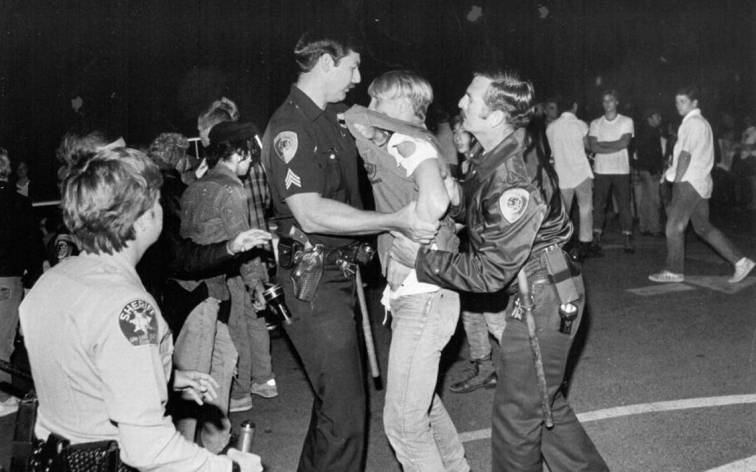 I guess in those days you just took your lumps and didn’t complain about it unlike today. But hey maybe no one complained because no one would listen. As a Punk Rocker in those days you were considered a freak, a weirdo an abomination, a blaspheme…. You were a second class citizen and no one cared!

What the fuck are you?… Is what I heard a lot of when I became a Punker. I knew a friend that was actually kicked off a public bus on his way to school one day just for having a Mohawk, nothing more. Can you imagine what kind of a lawsuit there would be if someone pulled that shit today?

It was a tough, scary fun time to grow up in… Anything could happen and it usually did. It may sound crazy but I wish I could do it all over again right fuckin now.